Along with other major U.S. cities, Houston is taking steps to respond to climate change, and its commercial building owners will need to do their part

Part 3 of 3 in a series focused on the growing regulatory measures companies must comply with to reduce greenhouse gas emissions through improved building efficiency.

Known by many as the “energy capital of the world” because of its oil and gas production, Houston, Texas is now working to maintain that title as the energy landscape changes and the city aims for a low-carbon future.

Already one of the hottest and most humid cities in the U.S., Houston could become even hotter in the next 60 years. A recent University of Maryland study shows that by 2080, Houston’s temperatures could feel closer to the current climate in Cuidad Mante, Mexico, where the average daily temperature is 95°F during its hot season.1,2 Being a coastal city, Houston is also challenged with sea-level rise as well as severe storms and flooding which have struck the region in recent years. These problems highlight the urgency to create and implement effective climate action strategies similar to what New York City and California are enacting to protect their citizens and environments as discussed in parts 1 and 2 of this blog series.

On July 25, 2019, the city of Houston issued a release announcing a draft of its climate action plan (CAP) that calls for increasing the generation of renewable energy, greater investment in “green infrastructure,” and expanding the use of alternative modes of transportation. Citing concerns about the limited federal response to climate change, Houston officials stress that change will require a community-wide effort. This effort is being led by Mayor Sylvester Turner, who is committed to adopting the goals of the landmark Paris climate accord, which includes becoming a carbon-neutral city by 2050. At the announcement event of Houston’s CAP, Turner told attendees, “If we take bold actions to lead our city on a sustainable path, we will leave behind a better Houston for future generations.”3

GHG emissions in Houston higher than elsewhere in the country

Creating a more sustainable Houston will be no small task. According to the Fourth National Climate Assessment of the U.S. Global Change Research Program, it is extremely likely that greenhouse gas (GHG) emissions from human activities are the dominant cause of the increase in global warming since the mid-20th century.4 Houston has one of the largest per capita GHG emissions in the country. In 2014, Houston residents and businesses generated nearly 35 million tons of greenhouse gases through carbon-fueled buildings, cars, and waste. If nothing is done, this number is expected to rise to at least 45 million by 2050.3

The city’s biggest source of these emissions is commercial and residential buildings, accounting for 49% of the problem, followed closely by transportation at 47%.5 These numbers demonstrate why commercial buildings are being targeted to meet climate action goals.

Sources of GHG Emissions in Houston 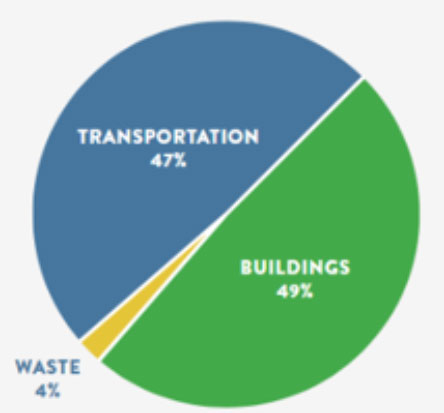 A look at Houston’s climate action plan draft, with a focus on building optimization

The city’s new plan is divided into four areas: 1) Transportation, 2) Energy Transition, 3) Building Optimization, and 4) Materials Management. Given that this article’s focus is on the impact of climate mobilization on commercial building owners, we are directing our attention to building optimization and some of the goals and strategies specified in the draft for this particular area.6

> Goal B1: Reduce building energy use and maximize savings

B1.1 Strategy
Update energy code and increase compliance by 2025

According to the city’s website, its full climate action plan is expected to be released by the end of 2019.

Houston’s buildings sector accounts for almost 50% of energy consumption.6 In response, a private sector initiative in Houston is driving investment in energy efficiency. Energy Efficiency in Buildings (EEB) Houston is working toward the goal of reducing energy consumption by 30% or more through innovative programs and initiatives.7 The EEB-Houston group includes partners from Houston Advanced Research Center (HARC), the World Business Council for Sustainable Development, and the U.S. Business Council for Sustainable Development.

According to EEB-Houston, a modest energy efficiency improvement of 25% would save substantial money for business owners and occupants, and contribute significantly to the spending power of consumers and businesses. EEB-Houston’s website, eebhouston.org, highlights additional benefits the city will enjoy by creating more energy-efficient buildings:8

• A 30% savings in energy spend in the commercial sector would translate into nearly 20,000 jobs for regional energy efficiency contractors, the supply chain, and the service sector over a five-year period.

• The region would gain a competitive edge in attracting and retaining residents, as sustainable cities attract talented workers and their families, especially Millennials.

• An achievable increase in energy efficiency would keep energy demand from exceeding current capacity, a real concern since Houston has a strong economy and continues to expand.

Optimizing HVAC systems to reduce GHG emissions and save energy

Since HVAC systems account for nearly 40% of the energy used in commercial buildings9, HVAC optimization should be a priority for building owners who need to reduce their carbon footprint. Optimizing HVAC systems no longer requires huge capital investments such as hardware upgrades or replacements, complicated installations, or disruptions to business. Today’s cloud-based HVAC software is becoming an increasingly popular option to monitor, analyze, and control systems in real time, all without human intervention.

Using patented algorithms with advanced analytical capabilities, Encycle offers a proven energy-saving solution, Swarm Logic®, which is playing a key role in the carbon emission reduction efforts of its commercial and industrial clients. This unique energy efficiency technology is unlike any other HVAC efficiency solution on the market today. Connecting via the cloud to existing building control systems, connected thermostats, or IoT platforms, Swarm Logic dynamically synchronizes HVAC rooftop units (RTUs), enabling them to operate as an intelligent networked system. This coordinated and closed-loop approach allows each RTU to dynamically adapt its operation to changing cooling requirements. Companies using Swarm Logic routinely reduce HVAC energy costs and consumption by 10%-20% with little or no capital investment.

• Consumption management – Swarm Logic ensures that RTUs operate only as much as needed without impacting occupant comfort, often achieving reductions up to 20%.

For more information on how Encycle can help you reduce your carbon emissions and energy use, contact us at +1 855-875-4031.